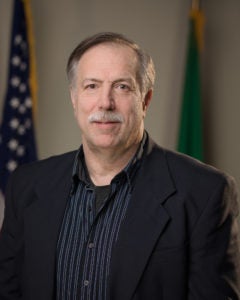 Blake Surina is the Executive Director of the Exercise Science Center, a health and fitness facility serving the citizens of Fircrest for over 30 years.  Mr. Surina grew up in Tacoma graduating from Stadium High School, and continued his education at Western Washington University in Exercise Physiology and Secondary Education.

He continued his graduate studies in Cardiac Rehabilitation and Hospital Administration, while working as a licensed Respiratory Therapist allowed him to have a leading role in community health.  Also a United States National Team Member and All-American Decathlete, Blake currently works as an adjunct faculty and guest lecturer at local colleges, coaching high school and collegiate athletics. As a member of the Tacoma City PTA Health and Wellness Committee he worked to increase Physical Education requirements for children, improve the quality of food offered in Fircrest schools, and played an active role in combating childhood obesity.

Blake was the past President of the Fircrest Civic and Heritage Association, the Fircrest Economic Development Association, Fircrest Beautification Committee and a Senior Fellow of the American Leadership Forum.  He is noted as an expert of Fircrest history and culture, and is passionate about identifying the elements that make Fircrest and its citizens unique and special.