In February 2022, the City of Fircrest announced its interest in purchasing undeveloped land along Orchard Street (known as the Bourgaize property) with the intent of turning it into park space. This announcement was included in the April edition of Town Topics. In April, the owners’ agent advised the City that the owners have reached a sale agreement with another buyer. As a result, the City will pause its interest in the property to enable the parties to work through their sale process. The timing of finding out this information was such that the City was not able to amend or stop the announcement in Town Topics from going out.

The City of Fircrest is exploring the feasibility of acquiring up to 32 acres of wooded property west of Orchard Street for use as a park. The intent is to fund the project via grants from land conservation organizations.

On February 22, 2022, the Fircrest City Council voted 4-3 to authorize a contract with the nonprofit group Forterra for grant writing and sales negotiation services.

A final decision on whether to purchase the property would be made by the City Council – likely in 2023 – based on the outcomes of the grant applications and community feedback.

The private owners of wooded lands along the west side of Orchard Street (north of Emerson) have been trying to sell the property for development for many years. However, the steep slopes and large wetlands have made development prohibitively expensive.

An agent for the owner of the property approached Forterra in 2021 to inquire about the possibility of helping the City of Fircrest acquire the property for conservation and use as a public park. Forterra (formerly known as Cascade Land Conservancy) has many years of experience in partnering with others to conserve natural areas.

As it researches the possibilities, the City sees great potential to manage all or most of this property as a “passive” park similar to Thelma Gilmur Park and China Lake Park, which have popular trail systems and offer the ability to enjoy nature in an urban area. Repurposing this land as a public park will also deter illegal trespassing and encampment on the property.

In addition, much of the property is within a wetland that’s protected by a City of Tacoma stormwater treatment facility. That wetland marks the beginning of Leach Creek, which connects to Puget Sound via Chambers Creek. If the City acquires the property, Forterra believes the City would be eligible for additional grants to replace the culvert under Emerson Street, which is the last barrier on Leach Creek that keeps salmon from returning all the way to the wetland.

As it considers its options, the City is holding open the possibility that a small portion of the land – a relatively flat area of roughly 4-5 acres at the north end of the property (adjacent to Holly Court) – could be sold by the City for development, the proceeds of which could be used to support the overall project.

This process is just beginning, and there are many questions to consider. The City plans to engage the community for input during this deliberative process. Please contact City Manager Scott Pingel at 253.564.8901 or spingel@cityoffircrest.net if you have any questions.

Below are a couple of maps that show the property under consideration and how it interacts with the wetlands and wetlands buffer. It also shows the piece that may be developable. 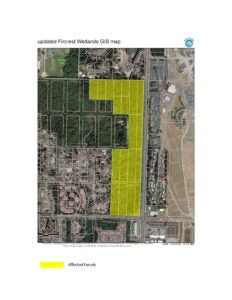 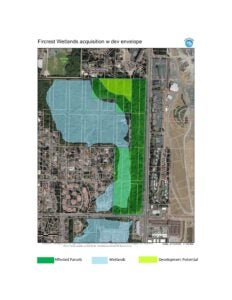