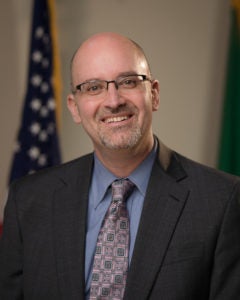 Hunter has served on the Fircrest City Council since 2012. His Council colleagues appointed him to the mayoral post for 2018-19 and again for 2020-21.

He has held several roles on the executive team at Metro Parks Tacoma since 2015, overseeing communications, human resources, and currently government relations.  Before joining the park district, Hunter served as director of communications for Pierce County, where his responsibilities included leading community outreach plans as a member of the U.S. Open Operating Committee as well as during the formation of South Sound 911, the emergency communications agency.

Hunter previously spent 19 years in journalism, working as a news editor at The News Tribune in Tacoma and as a reporter and editor with The Associated Press in Raleigh, N.C., Harrisburg, Penn., and Olympia, Wash.

He grew up in Raleigh and has a bachelor’s degree in history from N.C. State University. He is a member of the Kiwanis Club of Fircrest, Rotary 8, the Society for Human Resource Management, Engaging Local Government Leaders, the National Recreation and Park Association (and its state chapter), and Descendants of the Signers of the Declaration of Independence.

Hunter and his wife Kathleen have lived in Fircrest since 2007, and before that he lived in Steilacoom and University Place. His children have attended Whittier Elementary, Evergreen Primary, Chambers Primary, Narrows View Intermediate, Drum Intermediate, Curtis Jr and Sr High schools, and Tacoma Community College.